Common Leaks in and Around Chimneys | Chimney Repair Near Me 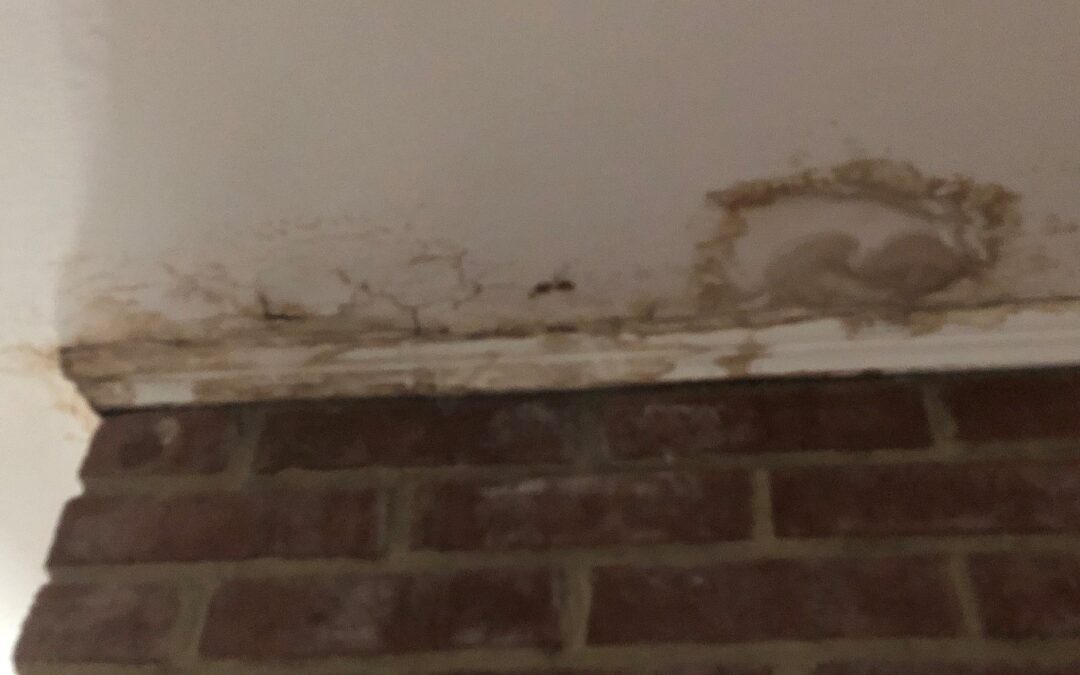 You might have noticed a stain appearing in the ceiling around your chimney, heard water dripping or even seen water coming down into the firebox of your chimney.  Chimneys are a common source of leaks especially on older homes.  They don’t usually get attention until they have a problem.  This article discusses the four main reasons chimneys leak when it rains.

Firstly, a leak you see in the ceiling may have more than one source.  In this writer experience this is the case in about 15% of leak issues and is a big reason behind call backs.  This is especially true with water coming in around a chimney!  A “shotgun” approach is recommended wherein all the problems are identified and fixed.

This type of leak is common when the chimney sits at the bottom or middle of the roof, especially on steep roofs.  Water gets in through a nail pop or damaged shingle, etc. and runs down the underlayment or plywood until it find the big hole in your roof deck which is the chimney.

2.  The most common leak around a chimney is also roof related.

The metal flashing installed by the roofer when the roof was installed is leaking.  This can be the metal you see, called the counter-flashing or the metal you mostly don’t see which is the step flashing under shingles.

In Virginia and Maryland the building code allows a roofer to fasten metal to the sides of a brick wall or chimney, squirt some caulking along the top and call it a day.  The purpose of this metal is to block water from running down the brick and getting behind the roof.  If the caulking job isn’t well done or the metal flexes with expansion and contraction from natural heating and cooling, a hole will form in the caulk seam.  In any case the caulking will age, dry out and deteriorate exposed to the sun and elements.  This also allows water to get behind this counter-flashing metal and eventually show up in your ceiling.

In the following picture the brown metal at the base of the chimney is the counter flashing.  Note too the cracks in the mortar on the chimney cap (also called the wash) and the black algae stains from water penetrating at the top and flowing out through the bricks.

In this picture the caulking has begun to fail and this is a leak.

Here 3 different someones tried renewing the caulking over the years with mixed results.  Removing the old dried caulking and installing new caulk is the standard fix.

A related problem often happens at the chimney corners where they intersect the roof.  Shingles are step-flashed with an L shaped piece of metal.

If the installer is using copper, stainless steel or another metal that can be soldered they can make a watertight corner.  If not the roof will be dependent on caulk to keep leaks at bay.  Roof details dependent on caulk require maintenance or they will fail.  These kind of leaks generally show up as stains on the ceiling below the chimney corners.

3.  Leaking through the chimney cap

Long gone are the days wherein the mason would set up a form and pour a block of concrete to cap off a new chimney.  Generally mortar or sand-mix is used on brick chimneys and many non-brick chimney chases are covered with a metal cap.

Galvanized steel chimney caps eventually rust or if they are held together with caulk, the caulking fails and they begin to leak.  No matter how nicely painted the portion one sees from the ground is it’s very likely the part that keeps water out and that one doesn’t see from the ground hasn’t been painted in decades if ever and is quite rusty.  Rust streaks down the side of the cap are a tell.  Caps can be replaced.

Note in the following picture the cracks in the mortar chimney cap.  Water enters the chimney here.  The easy fix is to renew the mortar or a metal cap can be fabricated and installed.

The white stains on the brick in the previous picture are lime.  Water soaking through the chimney dissolves lime in the mortar and carries it to the surface of the brick.  When the water evaporates the lime is left behind as white deposit.

Brick is kiln fired clay.  The exterior skin is very hard and the interior softer and more porous.  As a brick ages it gets softer and the skin loses strength.  Brick is naturally porous and absorbs water which later evaporates out.  Chimney bricks however get more than their fair share of moisture.

People in the house between cooking, bathing, breathing etc. give off close to a gallon of water each per day.  Some of this goes up the chimney and migrates out through the terra cotta flue.  If a chimney conducts fumes from fire, a furnace or gas stove or water heater, water is a side product of combustion.

Water also gets in damaged chimney caps and mortar joints.  This moisture is in addition to what a normal brick sitting in a house wall under an eave gets.  Often times this is more moisture than a brick can quickly loose from evaporation off the surface.  During winter cycles of freezing nights and warmer days, water inside the brick freezes and expands and then melts and contracts.

This expansion and contraction overcomes the tensile strength of older brick skins and the surface of the brick starts to spall or break off.  This is accelerated when the chimney is painted because trapped moisture has no way to evaporate out.  Which is why you should never paint your chimney.

Once a brick spalls the porous interior is exposed to the elements and the process accelerates.  Water repellant can slow this process down but for a spalled brick the solution is replacement.  Once too many bricks are damaged the chimney has to be rebuilt.

4.  The brick and mortar are damaged or missing or so porous that water is getting into the house.

Mortar goes through the same freeze-thaw cycle and will come loose in time.  If the mortar isn’t damaged but the brick is porous, coating with water repellant above the roof line is a very good preventative measure.  Once the mortar becomes damaged tuck-pointing, i.e. removing and replacing the mortar is required to a greater or lesser extent.

A good mason can work wonders on your chimney though.  Here is the same chimney before and then after it was tuck-pointed and washed.

If water is coming into the middle of your chimney, where the fire goes the first thing to check is the chimney cap.  If that’s in good shape check if your chimney has a “shoulder”.  Are the bricks okay there, is the mortar intact.  Oftentimes waterproofing the shoulder(s) solves this problem.  Otherwise it may be necessary to rebuild or cap the shoulder.

Chimney Repair Near Me

We work from a position of meeting our customer’s needs with quality work that we take pride in. From the initial consultation, we’ll show you our license and insurance information upfront so you always know who you’re working with.

Call 703-721-4420 today to speak with one of the professionals in our office about your chimney or roofing needs.